Earth’s atmosphere contains about 20% molecular oxygen, O2, a chemically reactive gas that plays an essential role in the metabolism of aerobic organisms and in many environmental processes that shape the world. The term oxidation was originally used to describe chemical reactions involving O2, but its meaning has evolved to refer to a broad and important reaction class known asoxidation-reduction (redox) reactions. A few examples of such reactions will be used to develop a clear picture of this classification.

Some redox reactions involve the transfer of electrons between reactant species to yield ionic products, such as the reaction between sodium and chlorine to yield sodium chloride:

It is helpful to view the process with regard to each individual reactant, that is, to represent the fate of each reactant in the form of an equation called a half-reaction:

These equations show that Na atoms lose electrons while Cl atoms (in the Cl2 molecule) gain electrons, the “s” subscripts for the resulting ions signifying they are present in the form of a solid ionic compound. For redox reactions of this sort, the loss and gain of electrons define the complementary processes that occur:

In this reaction, then, sodium is oxidized and chlorine undergoes reduction. Viewed from a more active perspective, sodium functions as a reducing agent (reductant), since it provides electrons to (or reduces) chlorine. Likewise, chlorine functions as an oxidizing agent (oxidant), as it effectively removes electrons from (oxidizes) sodium.

Some redox processes, however, do not involve the transfer of electrons. Consider, for example, a reaction similar to the one yielding NaCl:

Simple functional groups can be arranged in order of increasing oxidation state. The oxidation numbers are only an approximation:[1]

When methane is oxidized to carbon dioxide its oxidation number changes from -4 to +4. Classical reductions include alkene reduction toalkanes and classical oxidations include oxidation of alcohols to aldehydes. In oxidations electrons are removed and the electron density of a molecule is reduced. In reductions electron density increases when electrons are added to the molecule. This terminology is always centered on the organic compound. For example, it is usual to refer to the reduction of a ketone by lithium aluminium hydride, but not to the oxidation of lithium aluminium hydride by a ketone. Many oxidations involve removal of hydrogen atoms from the organic molecule, and the reverse reduction adds hydrogens to an organic molecule.

Many reactions classified as reductions also appear in other classes. For instance conversion of the ketone to an alcohol by lithium aluminium hydride can be considered a reduction but the hydride is also a good nucleophile in nucleophilic substitution. Many redox reactions in organic chemistry have coupling reaction reaction mechanism involving free radical intermediates. True organic redox chemistry can be found in electrochemical organic synthesis or electrosynthesis. Examples of organic reactions that can take place in an electrochemical cell are theKolbe electrolysis.[3]

In disproportionation reactions the reactant is both oxidised and reduced in the same chemical reaction forming two separate compounds. 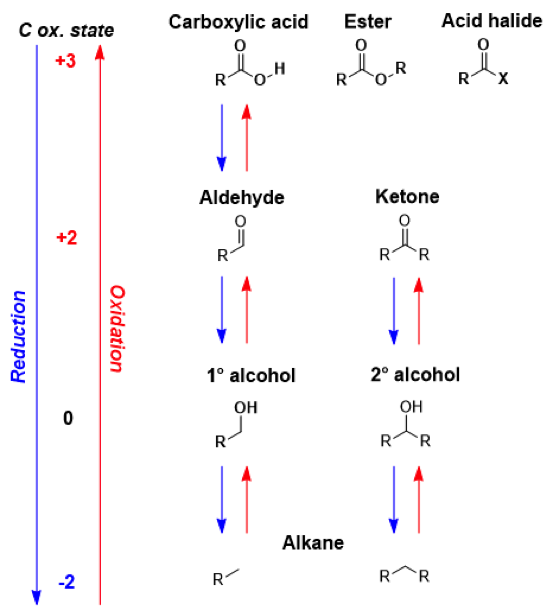